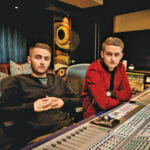 “Most of the mix is presenting what you can do with house, and that’s basically our career,” Guy Lawrence conveyed in a recent statement, adding, “the mix should represent where we’re at now; and where we’re at now is clubby.” Riding a similar wave to the duo’s third studio offering, ENERGY, the Lawrence brothers hav described the new mix as a companion piece to their club-ready 2020 LP. Ride along on Disclosure’s ENERGY victory lap with the brand new DJ Kicks: Disclosure mix below.