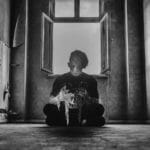 Qoiet has unleashed his full-length debut album, COPING WITH THE TRAGEDY OF WAKING UP. The multi-genre German producer unfastens a myriad of breathtaking vocal toplines through 10 tracks that deftly showcase just why he was ranked one of Dancing Astronaut’s Artists to Watch in 2021.

The LP, which follows April’s solo single, “saw BONES” via Kayzo‘s Welcome Records, abstrusely delves into Qoiet’s visceral world of sound. Diverting from his custom—hybrid dubstep and trap anchors—Qoiet’s debut LP peregrinates across a numbeer of genres such as down-tempo, rock, metalcore, and future-bass. Stream COPING WITH THE TRAGEDY OF WAKING UP below.

The post Qoiet ties dark with light in debut LP, ‘COPING WITH THE TRAGEDY OF WAKING UP’ appeared first on Dancing Astronaut.