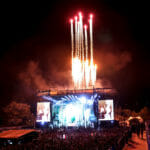 îLESONIQ Festival has announced the lineup for its 2022 iteration, slated to take place at Parc Jean-Drapeau on the island of Île Saint-Hélène. From September 24 — 26, the limited-capacity event will feature a turnout of new and established Canadian and United States acts alike such as deadmau5/testpilot, REZZ, Loud Luxury, Zeds Dead, Nostalgix, Spencer Brown, Bensley, Le Youth, PhaseOne, Eprom, Sam Feldt, one of Dancing Astronaut‘s Artist to Watch in 2021, Cloverdale, and more. In a press release, director of programming of concerts and events at Evenko Evelyne Côté stated,

“We are in seventh heaven to finally be able to invite people to dance. We really missed our fans, the artists and the music too…and above all, we missed getting together and feeling this sense of community that is so strong at the festival! In the team, it is a great pleasure to present this redux version of the important gathering that îLESONIQ has become.”

The Quebec government announced that beginning August 1, capacity limits for large outdoor events will be increased to 15,000 people, but festival organizers have stated that there will be an adjustment in capacity if the regulations are modified between now and the time of the festival. The full lineup and tickets to the redux edition of îLESONIQ are available here.