By DancingAstronaut.com on February 28, 2021 in Features, General, Music, runn, Supernovas 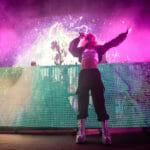 Supernovas is a recurring Dancing Astronaut feature dedicated to vocalists in the dance space who, with their own idiosyncratic vocal signatures and unique lyrical perspectives, have played pivotal roles in bringing electronic records to life. Each installment in the monthly series spotlights one vocalist. The serial continues with Supernovas 002: RUNN.

RUNN can’t remember exactly how the base of “Free Fall” landed in her lap, but she can recall a friend’s manager issuing this spoken invitation.

Her response was unambiguous: “Yes, absolutely.”

“Illenials,” of course, know how this story ends: in the fourth tracklisting of Illenium‘s sophomore LP, Awake, issued on September 21, 2017. But what they—and other listeners—might not know is that RUNN had never intended to earn credits as a vocalist on the Awake inclusion. Illenium, however, had other plans.

“I’d been a writer for many, many years and was very much a behind the scenes writer doing a lot of pop pitch work,” RUNN told Dancing Astronaut. Per serendipity’s—and Nick Miller’s—call to keep RUNN’s vocals on the track, then in the making, the singer-songwriter was not to remain “behind the scenes.”

“I wasn’t expecting that,” RUNN said. “I sort of stumbled into being an artist. I think it was always something I wanted to do, but was always too afraid to take that first step. And then it sort of happened so organically.”

“Free Fall” would be the push to set off a domino effect:

“It just gave me a place for my voice to be heard—not literally; but also, you know, literally—for what I had to say, instead of helping other people say what they wanted to say. And I found that incredibly empowering and fulfilling, and then when more ...