By Hypebeast on February 23, 2021 in Footwear, General, Style 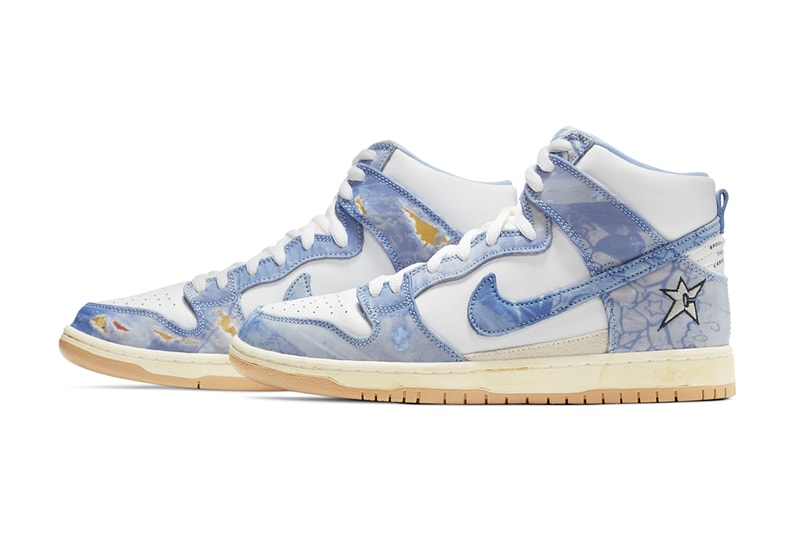 Baltimore-based skate brand Carpet Company and Nike SB are set to release a collaborative Dunk High Premium, and after just a few months into 2021, it's safe to say that the pair could already be a contender for sneaker of the year.

Helmed by brothers Ayman and Osama Abdeldayem, Carpet Company is known for leaning into fun, imperfection, and creativity. While a glimpse at the collaborative pair may have shown some of what's to come back in December 2020, we can now see the sneaker in all its glory, even getting a peak at what lies underneath the initial upper.

Crisp white leather serves as the base and peaks through on the toe box, mid-panel and on the heel, the latter of which now sports Carpet Company branding that wasn't previously seen in the teased pair. Contrasting this is the overlaying panels of swirling "Royal Pulse" blue fabric that gives the shoe its first bright guise. However, upon tearing the uppers, they reveal an underlying panel of yellow.

Elsewhere around the shoe, Carpet Company's signature star motif is embroidered using silver-toned thread into the lateral rear-quarter of the shoe's heel, while shaggy gray suede has also been used sparingly on the mid-section -- note, a touch seldom seen on an SB Dunk High.

The midsole is yellowed and aged tastefully, while a gum outsole has been added as yet another way to contrast the design. On the underneath of the shoe, Carpet Company's stamped logo appears and is the final detail on this wild pair of SBs.

Carpet Company announced on its Instagram account that it would be opening its Baltimore store for "Season Swoosh" on February 20 and 21, and that there would be a drop of the shoes yesterday at 7 p.m. EST. However, a wider release ...

Society6 Teams up With Disney for a Star Wars Collection That’ll Put Your Home Into Hyperdrive
Instead of Bookmarking Tweets, Use This Bot