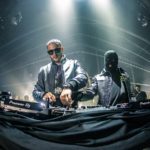 The year-long countdown until DJ Snake and Malaa share the stage at Bayfront Park has been reset amid Ultra’s 2021 cancellation, but there’s still a silver lining to the heartbreaking news. Following the Parisian cohorts’ Best Of Both Worlds stream and debut Secret Room go-around, the Pardon My French half disclosed a third back-to-back stream—unexpectedly, of course—and returned to the dim latter locale for another ID-laden set.

When Malaa prefaced the stream with “it’s about ID music tonight,” no one on Earth stopped to question it, considering that the duo’s previous appearances included a mountain of new music. Although nothing is 100 percent confirmed at the time of this writing, the tracklist currently points to Bleu Clair as the house mastermind behind the introduction, Honey & Badger‘s attachment to the one directly after, a potential ID and Malaa-headed rework of Petit Biscuit tossed in the mix, and a handful of others.

Enjoy an hour of house courtesy of DJ Snake and Malaa below.

The post DJ Snake and Malaa re-enter the Secret Room to complete their back-to-back trilogy appeared first on Dancing Astronaut.