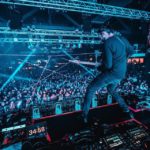 Concluding 2020 with an Ophelia end-of-year mix and commencing the new year with his first release shortly after, Trivecta pushes forward a continuous cycle of output as he serves up sonic monumentalism in his latest conception, “Twilight Of The Gods.” Enjoying a year of set play, the previously unreleased track marks the Tampa-based producer’s first solo original since his April 2020 EP, Everyday, and witnesses him switch gears as he goes all-in on bass demolition.

Summoning divine auras in his gargantuan coalition of stabbing synths and whipping sound design, Trivecta takes up arms in a sabotaging display of throbbing riddim drops, which run a devastating course in several variations. In company follow melodic circuits that give the cutthroat dubstep its surreal imposition, resonant of the production’s namesake.

Stream “Twilight Of The Gods” below.