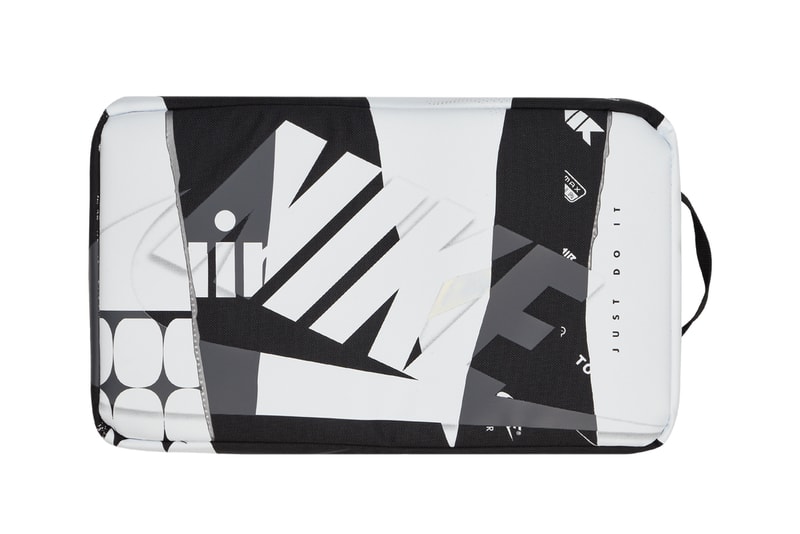 Nike's popular shoe box bag — a small container inspired by its famous shoeboxes — has released in a new iteration covered in various Air Max motifs. Though past shoe box bags drew from familiar packaging like Nike Sportswear's signature box, this one instead opts for a collage-style look atop its white and black build, paying homage to Nike Air tech both new and old.

A large Nike text-and-swoosh graphic reaches across the entirety of the bag's top half, which is split between black and white. One one end, there's a "Just Do It" spellout, on the other a detail from '00s Nike boxes. Cut-off graphics from various Air Max campaigns appear towards the middle. On the sides, a three-part text graphic intersperses a Vapormax hit with old-school Max branding. If you look closely, you'll also spot a Zoom Air hit and a spellout from the Air Max Plus's "Tuned Air" tech. More badges and stripes grace the bottom, and a carbon copy of each and every piece of text on the bottom of Nike shoeboxes completes the look.

The Nike Sportswear Air Max Shoe Box Bag is available now via retailers like Slam Jam, and is priced at $31 USD.

For more from the Swoosh, check out official images of the Air Force 1 B "3M Snake," a 2001 quickstrike that's re-releasing for the first time ever.