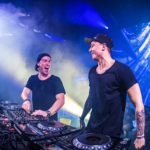 Hardwell is back. Sort of.

More than two calendar turns have come and gone since Hardwell last appeared on the music end to affirm his tenured standing as bigroom’s king, and exactly 10 months have lapsed since we last heard from the Revealed Recordings boss on social media. That status quo now is making a partial turn for the best for an unthinkably auspicious day one of 2021. In a completely unprecedented move, Hardwell and Blasterjaxx have formed a new one-two bigroom force of nature, Jaxxwell, to reawaken their long-lost collaboration almost three years to the date that it debuted at Germany’s staple venue, Bootshaus.

Blasterjaxx subtly reinstated the ID during Revealed Recordings’ virtual festival in September 2020 and confirmed thereafter that it would “soon” release, but all were left in the dark to speculate about when exactly “soon” was. Properly labeled “Bootshaus ID,” the linkup trilogy finale between Hardwell and Blasterjaxx (excluding “Fifteen” and following “Going Crazy” and “Bigroom Never Dies“), is concrete evidence that the genre that the two outfits helped pioneer is alive and well. While everyone is overwhelmingly thankful that the ID has been unchained as we wave goodbye to 2020, it’s currently unclear what, precisely, “Jaxxwell” entails, and if it alludes to an official relationship between the two or simply serves as a way for Hardwell’s hiatus to remain intact. Only time will tell, but for now, let’s celebrate New Year’s Day with some god-tier bigroom house.

Students Are Filling in the Plot Lines of the Green New Deal
SLANDER, Dylan Matthew open 2021 collaborative catalog with Greenice’s orchestral cover of ‘Love Is Gone’