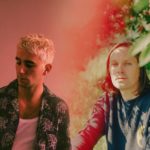 Over the past year, SG Lewis‘ ongoing times rollout has scripted the soundtrack for electronic’s triumphant return to the dance floor—even before the album was announced. Shortly before he formally set the date for the forthcoming LP—his first—on October 27, Lewis told Dancing Astronaut, “I’m always looking for an intensity of emotion and euphoria. I would want people to take that away from listening to my music.” For seasoned SG listeners, this goes without saying, thanks in large part to its conspicuousness on times’ freshman, sophomore, and junior singles, “Chemicals,” “Impact,” and “Feed The Fire,” respectively. This tradition of intent unsurprisingly holds true on “Time.”

Led by Rhye-supplied vocals, “Time” continues the expedition into future disco that “Feed The Fire” forged, this time across a lively span that sits in excess of four minutes. It’s mood music, no doubt, that carries the spirited torch from one times tracklisting to the next. Lewis contextualized “Time” in a press release, stating,

“‘Time’ is a song that is central to the album thematically and sonically. Rhye has one of the most unique and distinctive voices out there, and I’ve been a fan for so long. We wrote the song at Rhye’s studio after watching the sun set in Topanga Canyon, a memory which makes this song even more special to me. The beat initially started from a piano loop and a Dennis Edwards sample Totally Enormous Extinct Dinosaurs had started working on with Julian, which I then turned into the instrumental late one night in Nashville.”

“Time” is an emblem of the emotion and euphoria around which Lewis has oriented his musical endeavors and certainly, times. To feel it, all streamers need to do is listen. Hear times below, and pre-order the album, due February 19, 2021, here.