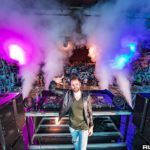 A trance portfolio wouldn’t be complete without a touch of Gareth Emery, and Ophelia Records knows this well. The proof is in the former’s remix of Fatum and Dylan Matthew‘s “Train To Nowhere,” through which Emery becomes an addendum to Ophelia’s array of domestic and invited trance talent, including label head Seven Lions, Jason Ross, and various Anjunabeats acts.

A debut is a time to make an impression, and Emery ensures that his first outing on Ophelia asserts his presence. The larger-than-life aura of Emery’s “Train To Nowhere” twist derives from his tasteful accentuation of Fatum’s original, with bass and melodic breaks proving his adaptive aces. A guest sure to attract another Ophelia-issued invite, Emery follows his October LP, THE LASERS (Unplugged), with the spin; stream below.