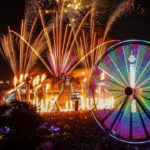 It’s far from a well-kept secret that the East Coast’s live electronic music space has been severely lacking throughout the years. After acquiring Washington, DC event promotion entity Club Glow and its two renowned venues, Echostage and Soundcheck, earlier in November, Pasquale Rotella and his events powerhouse brand, Insomniac Events, are making a move to rewrite the East Coast’s status with the formal launch of their Insomniac East division.

While EDC Orlando has served as Insomniac Events’ flagship East Coast festival for quite some time now, in 2021, it will officially act as Insomniac East’s first festival offshoot, with its return to Tinker Field for its 10-year anniversary slated for November 12–14, 2021. What else Insomniac East has mapped out for the coming year and beyond remains to be seen, especially considering the uncertainty of the COVID-19 pandemic. However, Washington, DC alone can be expected to play host to a wealth of upcoming events given Insomniac’s recent purchase.

The November 20 installation of Insomniac East’s Twitter account, billed as the “new home” for “all new East Coast Insomniac shows, festivals + lineup” announcements, is perhaps the clearest signal that Rotella and company’s East Coast bid will expand beyond EDC Orlando—and perhaps even DC—at a minimum. The next location on which Insomniac East might set its sights could very well be New York, given EDC New York‘s ongoing erasure from Insomniac Events’ destination list, dating back to 2017. The Tri-State area’s harsh deficiency in the festival department seems only to validate this possibility.

PHIPPS Explores the Good, the Bad, and the Ugly Sides of the American Dream
adidas Readies Its First Cycling Shoe in Over 15 Years