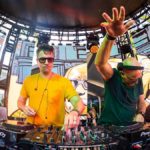 While the COVID-19 pandemic might have tossed a wrench into Revealed Recordings‘ original 10-year anniversary schedule in 2020, which would’ve included hosting duties at Ultra Music Festival‘s return to Bayfront Park in March, Hardwell‘s label is still continuing to commemorate its decade-long presence of moving the bigroom needle. After throwing a virtual festival in August, sans the Revealed boss himself as he remains on indefinite hiatus, Revealed Recordings is moving onto the celebration’s next phase with the revelation of a forthcoming 10-year anniversary remix EP along with its first entrant, Chocolate Puma.

Hardwell, Henry Fong, and Mr. Vegas’ 2017 union “Badam” was a sweltering cross-genre alloy between everything from dancehall to trap, and it’s now being driven into the tech house lane three years later, courtesy of Chocolate Puma. It remains to be seen what other Hardwell and Revealed Recordings staples will get adapted on the label’s remix EP in the coming weeks, but the duo’s revision of “Badam” provides a more than auspicious beginning to what should be a hearty dose of nostalgia.

Saturday Night Session 043: Imanbek reveals an EP with Rita Ora is on the way and discusses his surprise career in music
Twitch streamers, here’s your chance to DJ battle Diplo in ‘Fuser’