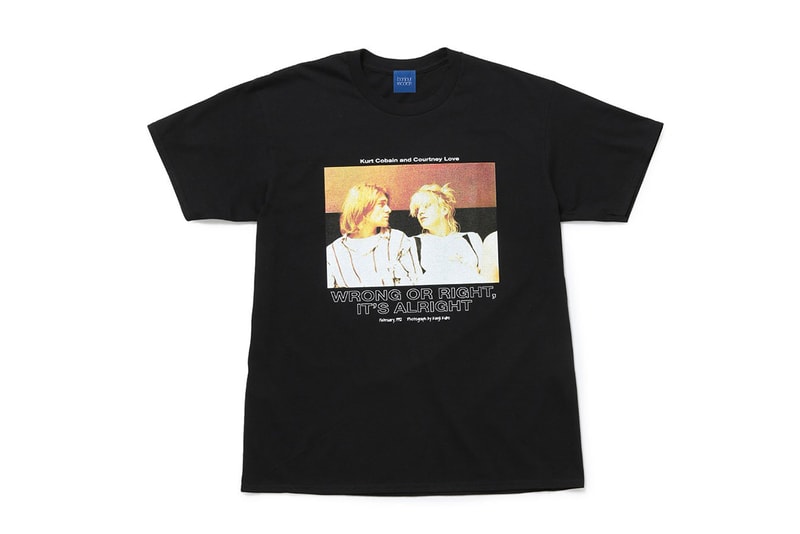 Multidisciplinary Japanese brand Bonjour Records has delivered a capsule collection that remembers Nirvana frontman Kurt Cobain and his then-wife Courtney Love. The collection comprises T-shirts, hoodies and a coach jacket, each sporting an image taken by Kenji Kubo in Japan in February 1992 under his body of work "WRONG OR RIGHT, IT'S ALRIGHT."

It's a touching tribute to the late rock singer, as the garments in the capsule are not only graced with the picture of him and Love (alongside the title of the body of work, the date, and the photographer's name), but also appear with "Peace, Love, Empathy" written on them. These three words were the final words Curt Kobain wrote in his suicide note before signing off.

Bonjour Records will release the capsule at its Shibuya Scramble Square Store to celebrate its first anniversary, commencing today. All other outposts as well as Bonjour Records' website will release the collection on October 31, with the coach jacket coming in mid-November. Alongside this, portraits of Thom Yorke featuring in the "loaded" collection will drop in November, while a Morrissey collection will come in December.

In other news, here are eight more drops you don't want to miss this week.

Nike Dunk Low Veneer 2020 Releasing in Toddler Sizing
So Far, Watch Dogs Legion Is One Of 2020’s Most Fascinating Games