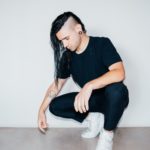 By 2010 electronic dance music had already begun washing up on American shores. While the underground genre’s fuse had already been lit and an inevitable mainstream explosion was inching closer, a screamo kid from LA with big chunky black frames and a half-shaved head came in and poured a can of gasoline all over the whole thing. In the summer of 2010, Sonny Moore had released his official debut EP, My Name is Skrillex, and on October 22, he was primed for an unforgettable breakout with the ensuing Scary Monsters and Nice Sprites.

Before the days of spaceships, headlining slots, side duos, and even OWSLA, an emerging Moore had inked a deal with deadmau5‘ already fledging mau5trap imprint for the release of his sophomore EP. By the end of 2011, Moore was double Grammy-nominated and by February of 2012, he would be bringing home two golden gramophones—one for Best Dance Recording on the EP’s two-time platinum certified title track, and another for Best Dance/Electronica Album.

Nowadays, Skrillex’s second EP now plays back like a nostalgic relic of the past, yet it still manages to remain every bit as much of a hair-raising thrill ride as the first listen a decade ago. Parallel to the EP’s namesake, David Bowie‘s 14th studio album, 1980’ Scary Monsters (And Super Creeps), Skrillex’s sophomore EP struck the perfect balance of rambunctious creativity and mainstream success—a precedent in Moore’s music that remains to this day. The project would go on to be the catalyst for Moore’s own eventual label, the launch of ZEDD and Porter Robinson‘s careers among others, and ultimately cement Skrillex’s sound as the audio of the future.

By 2020, Skrillex would go on to be named Dancing Astronaut‘s top artist of the decade with a mile-long ...

This Simple Texas Chili Makes an Incredible Frito Pie
Afrojack calls for an Ally Brooke encore on ‘What Are We Waiting For?’