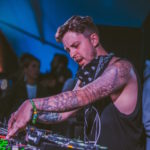 In a series of tweets sent on October 18, Ekali‘s ex-fiancé Sam Black accused the producer, lesser known as Nathan Shaw, of extensive domestic and verbal abuse, as well as infidelity and ongoing substance abuse. “You put me through hell by gaslighting, lying, cheating, and abusing me, abusing drugs, going to rehab, which I stood by you for,” Black wrote.

Ok. I can’t. Here’s A SMALL PART of the story of who the real @EkaliMusic is. You made your bed. Lay in it. Every word of this is fact. I have all the receipts. I can’t let your fans be deceived anymore. Here you go internet. pic.twitter.com/2UWZUYAUNN

Shortly after publishing the statement, Black, who said she has “about 85 photos and videos and emails” demonstrative of the abuse, shared photos of bruises on both of her arms.

Black went on to share several direct messages from Ekali fans who reportedly had sexual encounters with the producer while Black and Shaw were together. It is unclear whether the alleged encounters consistently transpired with underage fans. One of the messages that Black anonymously tweeted notes that the girls that Ekali invited both backstage and to his hotel room after a November 2019 show were “barely 18.” This specific incident is said to have taken place during the same time that Black and Shaw got engaged; the two publicly announced their engagement on November 18, 2019.

Well here’s at least ONE of the 4 confirmations he was cheating on me for u all pic.twitter.com/Vr3rWHeX1E

NASCAR Charters: Explained
Formula E Might Be Coming Back To Canada