By Hypebeast on September 16, 2020 in General, sports, Style 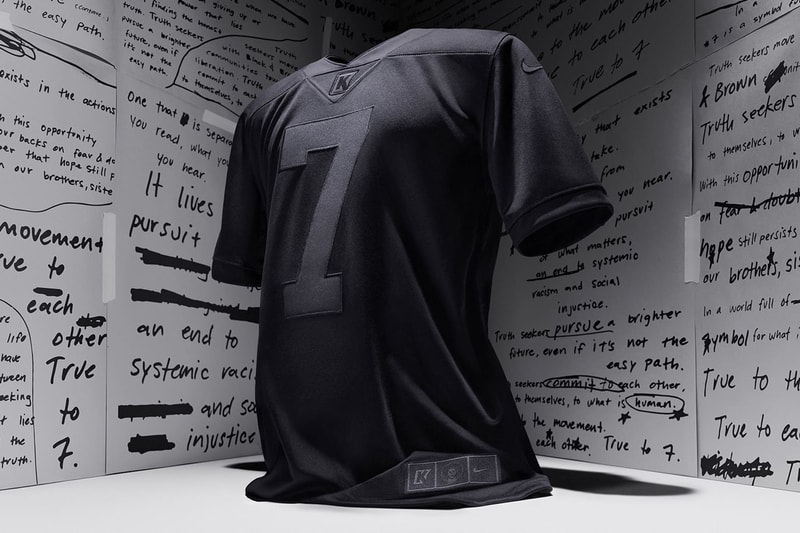 After making a triumphant return to Madden NFL 21, powerful social justice activist Colin Kaepernick has teamed up with Nike once again for a monochromatic "True to 7" jersey. Following up 2019's black/white "True to 7" jersey and special Air Force 1, Kaepernick and Nike Sportswear are using this all-black jersey to celebrate the fourth anniversary of the first time the former San Fransisco 49ers quarterback took a knee on an NFL sideline to protest systemic racism and police brutality. A high-quality "Icon Edition" jersey, the stark design features Kaepernick's #7 on the chest and a stylized K graphic on the collar. The jocktag offers a three-part design with a Swoosh, Kaepernick's signature afro logo and another K hit. On the back, another #7 placed below Kaepernick's name completes the simple-yet-powerful look.

Although the exact date Kaepernick first took a knee was September 11, the Nike Kaepernick "True to 7" jersey in all black will hit Nike SNKRS on September 17, retailing for $150 USD.

For more from Nike, check out Denham's richly dyed iterations of the Air Max 95 and Air Max 90, or A Ma Maniére's F&F Nike Air Force 1 "Hand Wash Cold" — a special style that's limited to a mere 898 pairs for the store's inner circle, though registered voters have a chance at a pair too.

Apple Fires Back At Epic, Saying Lawsuit Is A Publicity Stunt
Foods That Are Unexpectedly Improved by a Little Hot Sauce