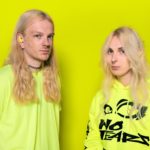 100 gecs‘ meteoric rise to stardom is showing no sign of slowing down. The hyperpop duo began to gain mass notoriety and critical acclaim following the release of their 2019 debut LP, 1000 gecs. On Friday, July 10, the follow-up record, 1000 gecs & The Tree of Clues, will finally arrive.