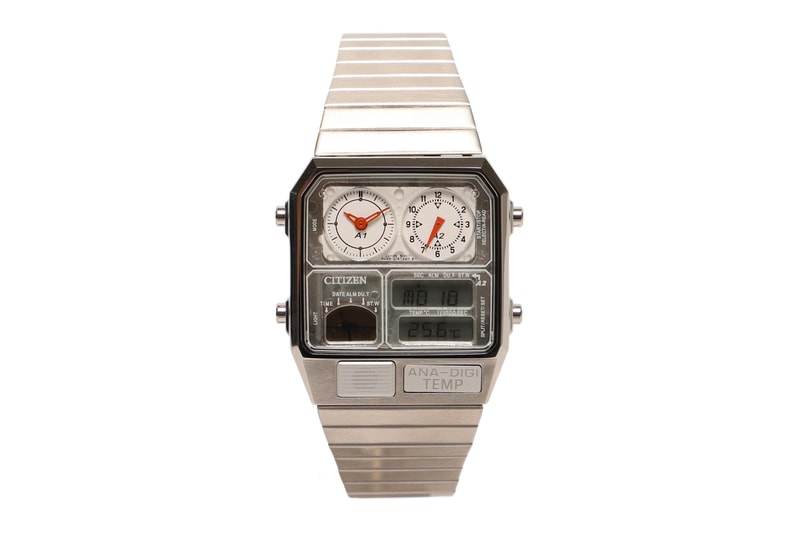 Following up last year’s collaborative Ana-Digi Temp watch in gold and black iterations, famed Japanese label-meets-retailer BEAMS has now geared up with Citizen once again for an understated silver iteration of the 1982-originating wristwatch.

When it originally released nearly 40 years ago, the Ana-Digi Temp featured a variety of progressive features. It utilized an automatic calendar that took into account unique days, a function that measured heat, and the rather revolutionary “Dual Time” feature, whereby two programmable analog clocks for different time zones were included alongside a digital clock for precise times.

For the latest timepiece, BEAMS and Citizen have loyally honored the watch's original retro design cues by way of a clean silver colorway. Opting away from the loud wood and camouflage face details of 2019’s iterations, the newest offering comes with a face choice of either white or black. This provides a backdrop for the watch's alarm, "Dual Time" feature, and thermostat, with other details on the watch such as four buttons placed on the sides and a tiny speaker near the "Ana-Digi Temp" text, also included.

Take a detailed look at the BEAMS x Citizen Ana-Digi Temp above. The watch can be preordered via BEAMS' webstore for ¥26,400 JPY (approximately $245 USD) and is expected to arrive later this month.

For more related news, Places+Faces and G-Shock have teamed up for a reworked DW6900.