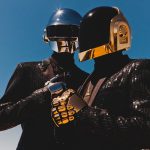 23 years ago, Daft Punk released their debut studio album Homework. The collective piece would not only go on to lead the late 90s wave of French House, but also catalyze the duo’s road to changing the course of electronic music’s history. Homework‘s globally-charting success brought four singles to the forefront including arguably one of Daft Punk’s most seminal tracks, “Around the World.”

Released March 17, 1997, the Gold-certified “Around the World” hit dancefloors, clubs, and worldwide speakers with its retro, bubblegum disco flavor; since then, its iconic three-line hook has withstood two decades and will undeniably continue to indoctrinate eager listeners to the golden era of the elusive robots.

Now, without further ado, revisit Daft Punk’s seminal “Around the World” and its choreography in all its music video glory below.

NBA, Premier League Teams Are Simulating Cancelled Matches In Video Games
The Art Of Ori and the Will of the Wisps