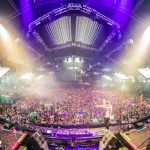 Tens of thousands of trance fans converge each year in the Netherlands for Armin van Buuren‘s annual A State of Trance (ASOT) home country celebration. Clocking in at 950 episodes since its May 2001 birth, the weekly radio show has remained the most followed in the genre while its showcases—including its flagship Dutch edition—often sell out. Fans who experienced the 2020 edition in person or via live stream can now relive the night with the full release of main stage sets.

Performers gracing the stage alongside van Buuren this year represented a wide range of the genre spectrum, with Ilan Bluestone, Giuseppe Ottaviani, Aly & Fila, and Markus Schulz all bringing their unique styles to the table. Next up for ASOT is their Ultra takeover on Saturday, March 21 to ring in their 10-year anniversary with the festival.