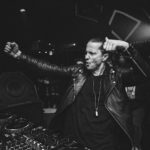 Saint Punk has put a grunge house spin on Pusha T‘s first released song in 2019, “Sociopath,” a track produced by Kanye West. The minimal original features a ringing cowbell and booming bass with the vocal cadence that’s made half of hip-hop duo Clipse such a successful solo act alongside some bars from Kash Doll.

The electro-punk producer’s take involves a thicker four-on-the-floor kick, driving the sped-up vocals along crisp high-end percussion. A build reminiscent of 3 a.m. sounds at a Brooklyn warehouse falls into a driving, low-end guided, glitched-out house groove that creates a grungy harmony for the rappers lyrics about a gold digger.

Saint Punk launched his project in 2019 with the majority of his releases on Tchami’s Confession label.