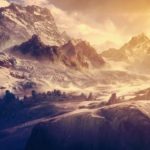 New Blackmill should serve as a serendipitous Christmas gift for any melodic dubstep/chillstep devotee. The track, “Redemption,” arrives with all the age-old “Let It Be” creator’s ethereal bells and whistles. It seems there could not be an apter title for the new track from the British, eternally under-the-radar producer, who partakes in 0 DJing or touring.

Pensive strings pluck into eternity, while technicolor melodies arpeggiate over the top-end. All the while, the track’s chugging bassline and classic dubstep snares keep the atmospheric heart of the composition fierce and focalized. Blackmill, as per usual, proffers a pristine addition to any study, chill-out, workout, or afterhours playlist.

“Redemption,” according to the producer himself, arrives just in front of a full-blown album ready for release. By the looks of it, a bet that 2020 will be the long-awaited year that Blackmill sees a real return seems a safe wager. On behalf of the largely dormant melodic dubstep community, welcome back, Blackmill.