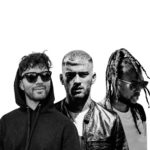 Few moments are more sacred than the reprieve Saturday night provides from the daily grind of school and work. Its importance is meant to be emphasized, and thus, a feature dedicated to “doing the night right” was born. Saturday Night Sessions are set around energizing mixes meant to get the party started. New or old, each episode has one cornerstone thing in similarity: they serve as the perfect backdrop for the weekend pregame.

R3HAB is a producer who has successfully achieved mainstream notoriety while maintaining a positive affinity within the electronic music scene. Once an artist starts enlisting high-profile pop collaborators, many fans are quick to peg him or her as a sellout. R3HAB, whose real name is Fadil El Ghoul, has found a way to release singles authentic to his electronic beginnings while also producing radio hits that blend subtle progressive undertones with a compelling vocal line in order to maintain its radio appeal.

Recently, El Ghoul enlisted one of the most high-profile pop collaborators out there. He tapped Zayn Malik, former member of pop band One Direction, and Jungleboi for new single “Flames.” After the track received a warm reception, they have released an elaborate and thought-provoking music video for the single that’s set to come out in January.

Dancing Astronaut spoke to El Ghoul about the thought-provoking video, and about how the concept for the visual narrative came to be. He explains, “It’s Zayn’s creation to be honest. He had this concept and storyline, and all I really had to do was read it and enjoy.”

While “Flames” is the artist’s most recent release, he has been putting out music for more than a decade. He started off his career putting out various singles alongside Hardwell, and the rest is history. While ...

2019: The year of cosmic horror games
Update the Twitter App on Your Android Phone Now