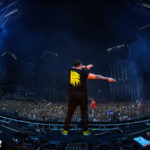 Since its foundation dating back to April of 2010, Revealed Recordings has been the indisputable dance music trailblazer when the conversation turns to the champion bigroom housings. In celebration of an entire decade as a pristine powerhouse imprint, Hardwell is officially set to play host during the 2020 iteration of Ultra Music Festival. He’s formally announced that the Revealed Recordings family will find a home within the UMF Radio stage for the label’s third overall touch down at the hallowed festival following appearances in both 2016 and 2018.

While it remains to be seen which specific Revealed Recording artists will be in attendance when Ultra makes its highly anticipated return home to Bayfront Park this March, fan assumptions based on recent label releases and the label’s ADE night would render a handful of prime suspects such as KAAZE, Dannic, Sick Individuals, SaberZ and Maddix.

The conversation can’t end there, though, as the most mouth-watering piece of this puzzle rests in the hands of Hardwell, who still remains in the midst of his DJ hiatus. The label boss himself has notoriously conjured up some of his most historic moments as an Ultra mainstage resident throughout the festival’s existence and with his entire Dutch family by his side. It could present itself as an opportune moment for a reclamation of the bigroom DJ throne.