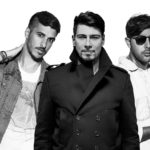 Thomas Gold has teamed up with Israeli DJ and production duo Teamworx for unrelenting new single, “We Remember.” The package comes equipped with both a standard version and extended cut.

Gold and Teamworx draw inspiration from the pervasive big room sounds that permeated electronic music of the earlier 2000s. They employ mechanical synths propelling the track forward along a thumping bassline, as a vocal cut chants, “Do you remember house?”

In the extended version of the release, additional synth work and otherworldly vocals fade in and out of the introduction for a slightly more complex and metallic-tinged version of the original. “We Remember” is the perfect track for a mainstage or big venue club drop.

The single and extended version have been released via Nicky Romero‘s Protocol Recordings.