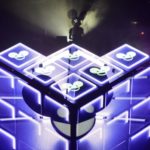 While deadmau5 is most widely known and appreciated for his legendary progressive sounds in hits like “Strobe” and “Ghosts N Stuff,” it’s no secret that the producer possesses a strong command of other genres. His techno-leaning side project testpilot is evidence of this. Therefore, while his new single does not “FALL” completely in line with the styles of his historical discography, one cannot be surprised that it is still of the highest of quality, and is sure to excite his dedicated fanbase.

“FALL,” released via the mau5’s own mau5trap label, is a seven minute journey through the grittier side of electronica. Overflowing with afterhours energy, it’s en route to becoming the producer’s next anthem as he rinses it through his upcoming tour date. “FALL” is a fitting sequel to deadmau5’s recent originals “SATRN” and “COASTED,” and it will be interesting to see what the mastermind has lined up next. Catch him on his remaining Cube v3 tour dates here.