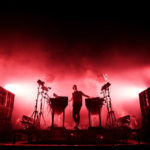 Fans of techno maven Richie Hawtin know that his live shows are one-of-a-kind. Following up on the North American CLOSE tour, Hawtin has launched a brand new mobile app in attempt to give fans a taste of the live experience.

The application, aptly called CLOSER, allows fans to interact with the audio and visuals of Hawtin’s performances in order to provide a more immersive experience. According to the app’s description, the goal of CLOSER is “to bring greater transparency to the underlying art of DJing in the ‘press play’ era.”

Currently, CLOSER features two visual offerings. The first is Hawtin’s CLOSE combined (Glasgow, London, Tokyo – LIVE) audiovisual mix album, while the second showcases his 2017 Budapest performance. More audiovisuals will be added to the app, along with live streams of Hawtin’s shows. In a press release regarding CLOSER, Hawtin states:

“I’ve always been interested in the intersection of music and technology and the CLOSER App is the perfect marriage of the two, which I hope gives new insight into how I play and create my unique Hawtin sound. In a world filled with DJs who are happy with the status quo of electronic music performance, I strive to push forward, challenge myself and hopefully inspire the next generation of Techno performers to continue to go beyond the norm.”

CLOSER is made in partnership with Telekom Electronic Beats, and is available for free on the iOS App Store and Google Play.

Justice’s ‘IRIS’ visual gets physical release on VHS and Blu-Ray, along with limited merch capsule
Grid On Stadia Runs Well And Reminds Me What I Love About Racing Games