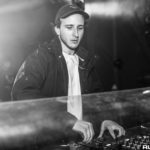 It has been fascinating to watch the most recent chapter of RL Grime‘s career unfold. Henry Steinway’s Grime persona emerged with the rise of trap in the earlier half of the decade, and then, when many thought the “Core” producer had reached the genre’s ceiling, he began championing other offshoots of the bass music umbrella, eventually launching his own Sable Valley imprint at the onset of 2019. Now, the latest addition to the label’s catalog is a new collaboration between the boss man himself and Juelz on “Formula.”

The track first saw the light of day the very end of the recent eighth installment of Grime’s beloved Halloween mix series. Since then, fans have been clamoring to get their hands on the official release. “Formula” lands as a percussive, high octane bass cut that certainly holds sway as the perfect setlist closer. Now that RL’s mission is less about his own sound and more about his influence, expect to see the Sable Valley founder pushing more new talent in 2020.