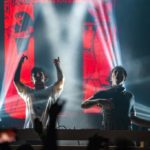 It was only a matter of time until two producers equally well matched in technical dexterity and emotive skill meshed their sensibilities. If the synergistic potential of Ekali and ILLENIUM‘s approaches to bass production wasn’t glaringly apparent prior to the arrival of “Hard To Say Goodbye,” the collaboration will render it irrevocably so.

The fourth single from Ekali’s debut album, A World Away, “Hard To Say Goodbye” invites future bass innovator, ILLENIUM, to impress his distinctive sonic signature alongside Ekali. The result is a cerebral production that plays to the strengths of both artists: visceral poignancy and ample bass.

“Hard To Say Goodbye” sources its ethereal vocal from Chloe Angelides. Angelides vocalizes the song with feeling, so much so that her emotional discord is palpable. Ekali and ILLENIUM suspend her vocal atop mounting, melodic chord progressions. The cohesive harmony of its elements characterizes “Hard To Say Goodbye” as an unsurprisingly affective effort.

The toiling towards A World Away, due January 20, also precedes Ekali’s tour of the same name. The live initiative will kick off in Seattle, Washington on February 6. View a complete list of tour dates, here.