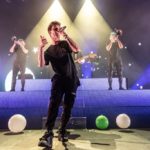 Phoenix is quickly becoming one of electronic music’s favorite New Year’s destinations with Decadence. The festival’s consistent ability to lock in top-tier electronic talent gives party goers a two-day sonic snapshot of the year’s most popular music just ahead of the ball drop. While there’s no snow or skating in sight, Phoenix generally tends to make up for its lack of winter with an unbeatable year-ending Decadence lineup. Now, previously announced headliners Skrillex, Diplo, Illenium, Malaa and Tchami are joined by a final wave of talent that completes this year’s billing.

Dabin and Said The Sky will perform under their joint Dab The Sky banner, GRiZ and Subtronics will perform as Griztronics, and breakout producer Whipped Cream all round out this year’s lineup. Additional firepower comes by way of Night Bass boss AC Slater, Zeds Dead, JOYRYDE, Fisher, and Jamie Jones. Decadence runs December 30 – 31 at Rawhide Events Center. See the full lineup below.

Death Stranding Takes Me Back To The Smoky Mountains
How This Bonkers 1,000 HP Tractor Set A Guinness World Record For Speed