By DancingAstronaut.com on November 8, 2019 in General, Music, The Chainsmokers, World War Joy 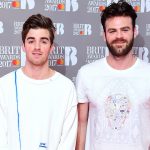 “Push My Luck” leans on Drew Taggart‘s vocals, and light instrumentals carry a majority of the track. A simple yet catchy synth note progression creates a delicate drop that doesn’t detract from the sense of calm the track instills.

The release falls on the pop-leaning side of the production spectrum from Pall and Taggart. A release date has not been confirmed for World War Joy, but the album is set to be released in full in 2019. This means the duo have a month-and-a-half before the remaining four releases should be out.