By Hypebeast on November 8, 2019 in Footwear, General, Style 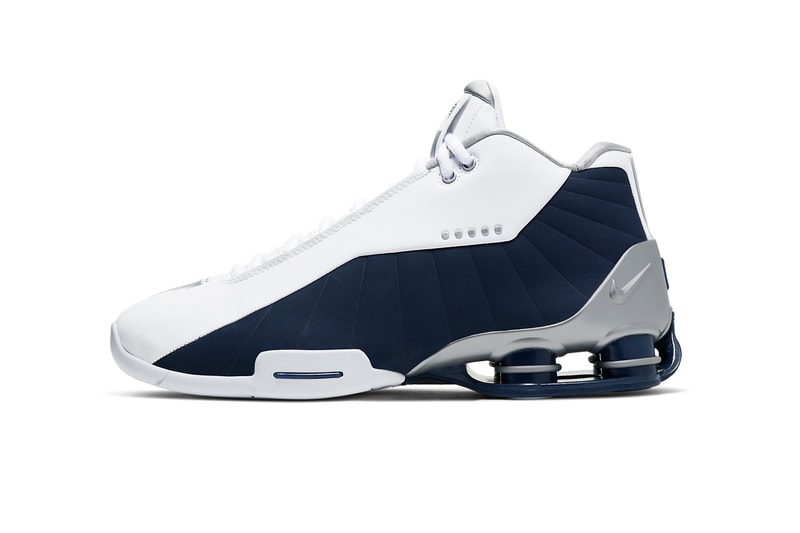 During the 2000 Sidney Olympics, US Men's Basketball Team guard Vince Carter soared over 7'2 French center Frederic Weis for a jaw-dropping slam dunk, widely regarded as the best in-game stuff of all time and performed in a pair of Nike Shox BB4s. Now, the shoes that helped the high-flying VC give new meaning to "bounce" are back in a faithful recreation of the original "Midnight Navy" colorway that was on Carter's feet for the scintillating slam over Frédéric Weis.

In line with the US Olympic team's navy, white and red uniforms, these Nike Shox present a two-tone upper that combines smooth white leather and textured navy nubuck. Silver accents are dispersed throughout, appearing on the tongue, toebox and midfoot. Of note is the upper's lack of branding, with the only Swoosh graphic appearing in embossed form on the plastic heel clip.

Below this heel clip sits the technology that gives the shoe its moniker. Four navy polyurethane columns are contained between a duo of silver Pebax plates, providing responsive support and cushioning. Of note is that the Shox BB4 was the first basketball sneaker to feature the tech, as previously it had only been used on running models like the Nike Shox R4. A white and navy blue outsole completes the look.

As Shox were quite literally designed to put a spring in the wearer's step, Carter's demolishing dunk over Weis could not have arrived at a better time, or on a better stage. His aerial feat lifted the allure of Nike Shox to new levels, and now, 20 years later, you still might catch him wearing a pair on-court with the Atlanta Hawks during his record 22nd NBA season.

The Nike Shox BB4 "Midnight Navy" is available now on Nike.com. The retail price is set at ...