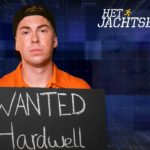 Although Hardwell has taken an indefinite hiatus from touring, the Dutch powerhouse has remained committed to putting work both inside and outside of the studio. With a relentless output of music including a massive 51-track Revealed Vol. 10 compilation album, triple-collaboration “Left Right” with Deorro and MAKJ, the internationally famed DJ continues to push forward with his label Revealed Recordings and miscellaneous activities—one of which proves to be as entertaining of a source as any.

He recently starred in a Dutch YouTube series, “Jachtseizoen.” Created by StukTV, the web series first aired in December 2016 and centers on a competition premise where they welcome a new guest opponent weekly. Uploaded Saturday, Oct. 26 on StukTV, the comedic episode finds Hardwell competing against the cast of StukTV in a prison break scenario where he must escape in order to win.

The rules of the competition detail that Hardwell has a 20-minute head start before his competitors are allowed to start finding him. He will also hold a GPS tracker that relays his location to the competitors every 10 minutes. If Hardwell manages to evade his opponents for four hours, he wins.

Watch Hardwell on the run below to see the results.