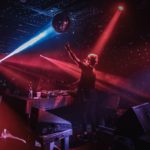 In 2019, festival organizers look to build on last year’s success by bringing in headliners CIREZ D and TESTPILOT, along with a piping hot array of other artists like Bicep, Idris Elba, Nic Fanciulli, Gorgon City, Nora En Pure, and more.

Now, the festival has revealed its daily lineups, featuring deadmau5’s TESTPILOT alias topping day one and Eric Prydz’s Cirez D moniker at the top of day two at The Statesman. Saturday, Nov. 16 will also feature acts like Chris Lake, i_o, and Rinzen, and Sunday, Nov. 17 will bring performances from Lee Burridge, Gorgon City, Dom Dolla and many more. Along from the dynamic lineup, the festival will also feature live painting and art installations, live performers, totem, and costume contests.

“We couldn’t be more pleased with the glowing feedback from our debut year and now with this year’s lineup,” said RealMusic Events & Seismic co-founders Kelly Gray & Andrew Parsons. “Many US festivals tend to have very similar lineups so we really wanted to switch it up and cater to the more seasoned, underground connoisseur – and yes, believe it, in Texas.”

View the full lineup below and get tickets here.