By DancingAstronaut.com on September 18, 2019 in Above & Beyond, Common Ground Companion, crystal skies, General, Music, No Mana, Zoe Johnston 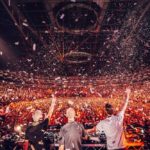 Live from Hong Kong, Above & Beyond marked their Group Therapy 300 edition with a special set. Featured within the performance was the celestial “There’s Only You,” featuring Zoë Johnston. The club mix and extended club mix were released earlier this year off their Common Ground Companion EP, and now, a remix project has also been revealed with reworks from No Mana and Crystal Skies.

No Mana also shared an extended version of his club thumper for those mesmerized by the gritty synth that sparks between arpeggiated high ends and contrasting harmonies strung together in lower octaves. The No Mana play runs with tech-house and techno appeal, plastering the four-on-the-floor rhythm with the aforementioned melodies.

Crystal Skies keeps in the trance lane during the introduction with an extra focus on chord progressions and varying melodies. The slow build creates this immense energy that when released produces a strong future bass melody with a dubstep backing.

Good Morning Mix: start the day with the shadowy ambience of Gorgon City’s Burning Man set
Where to Get Free Cheeseburgers For National Cheeseburger Day