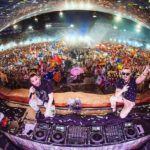 Dimitri Vegas & Like Mike will debut their famed fall event, Garden of Madness in the United States on November 2. The international phenomenon, formerly known as Bringing The Madness, will touch down at the New York Expo Center for its inaugural iteration in the states. Produced by the team behind Boom, Belgium’s renowned Tomorrowland festival, Garden of Madness promises attendees a high-caliber live event experience with adrenaline-spiking dance action.

The November 2 date is Garden of Madness’ sole US showing of 2019: after its short New York stint, the series will cross the Atlantic, traveling abroad to Liverpool for a December 7 edition at the Steel Yard. The Garden of Madness run will conclude at the Sportpaleis Antwerp arena on December 20-21.

Garden of Madness holds a rich history in the context of Tomorrowland, where Dimitri Vegas and Like Mikes’ concept has been a cornerstone of Tomorrowland programming since 2014. The conceptual event series has also become a regular component of Ushuaïa Ibiza’s annual calendar as well. The White Isle hotspot has consistently welcomed Garden of Madness back for residencies for three respective seasons. Interested in attending? Visit Garden of Madness’ official website for more information.