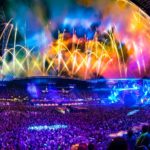 Go to a festival in Transylvania they said. It will be fun, they said.

They couldn’t have been more right.

Nestled within the dilapidated beauty of Cluj-Napoca, Romania’s 2nd largest and according to locals, most vibrant city, lies Untold, a behemoth of an electronic festival that oozes as much whimsy and eccentricity as it does musical quality and diversity. This year’s edition welcomed over 370,000 international techno, trance, and even pop enthusiasts to Cluj (which, itself, sports a population of 300,000) to show the world just why the European Festival Awards named Untold the Best Major Festival in Europe in three of its last four years running.

To put the size of Untold into perspective, the festival’s Main Stage was housed in a soccer stadium set to host 70,000, swiftly tipping capacity during headlining sets. For context, Yankee Stadium holds 54,000.

Beyond the main stage, the grounds of Untold were as rich as they were sprawling, spanning the better part of a mile and concealing nine subsidiary stages within the “enchanted forests.” A slight wander from the beaten path would yield droves of art installations and vendors, which included, but wasn’t limited to, streetwear, old-world leathercrafters, and barbershops (for that mid-festival snip). Beat on, and one might stumble on the steampunk-themed Time stage, decked out in brass and fitted with funiculars and gaseliers. Jaunt further and find the shamanistic Daydreaming stage, which effortlessly blended kaleidoscopic visuals with its natural surroundings, perfect for the multicultural acts that it gave home to for the weekend.

Envisioning anyone attending a festival (especially one on the other side of the world) for the far-out stages and atmosphere alone is an arduous undertaking. Essentially, people come for the music. Thankfully, the lineup at Untold was something to behold, particularly for an out-of-towner. Sure, ...

The Best Back-to-School Advice for Teens, According to Reddit
adidas Dresses the UltraBOOST “Japan” in Vibrant Fireworks