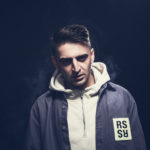 The visual is set, first, on an ostensibly normal nighttime road, but soon contorts into a scorching, Mad Max-esque terrain. The track pulses fervently as the chaos of video’s whirlwind narrative and almost whimsically austere characters whip across the screen. Metallic synths grind and churn, while a heavily pitched-up vocal cut, compliments of Habstrakt’s close friend and longtime collaborative partner, Pauline Herr, skips atop the quixotic production.

The track itself traces Monstercat’s recent synergistic shift into scoring video games, namely the widely popular driving game, Rocket League. “The One” is currently being featured in the game’s official soundtrack.

The voice of The One, About You, Vibin, Vertbreaker remix, the adlibs in Movie, and so many others.
Pauline has ben the centerpiece of so many of my records and the Habstrakt distorded vocal sound. Proud to have such a talented and awesome friend in my life. Love u @paulineherr pic.twitter.com/uR5aTTHZUx