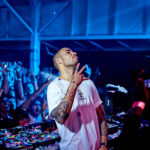 It’s been more than four years since the release of TroyBoi‘s “Do You?” and momentum on the notable track hasn’t slowed. “Do You?” has garnered more than 68 million plays to date and just recently got an official release on OWSLA. Accompanying its publishing on Skrillex‘s label is the arrival of a sultry music video, directed by Parris Goebel and featuring the ReQuest Dance Crew.

The British producer shows no signs of slowing down, continuing his tour de force by announcing a massive fall tour with Yultron. From October to December, the artists will trek all across North America, with stops in Dallas, San Francisco, Brooklyn and many more. According to a press release, the tour promises “throwbacks, soul, and old-school music… a sound journey through the decades that have inspired Troy.”

Catch TroyBoi and Yultron on tour here and view the full list of dates below.