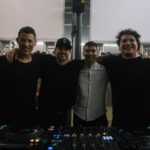 Some of humanity’s greatest accomplishments are born from collaboration. The Empire State Building, to Coachella, to the iPhone, mark just a few of the wide range of items achieved from combining efforts toward a common goal. These wonders were simply too much for one human being to handle. When people work together, a level synergy is often reached that is unique to those involved. It doesn’t matter if they’ve known each other for years or for minutes; if the chemistry is there, then great things will happen, and that is the story with Desert Hearts Black.

Rinzen, Marbs, and Evan Casey have been involved with Desert Hearts for years, but they haven’t worked together in the studio for very long. In fact, Rinzen and Casey had only been working together for a number of days before Marbs, a co-founder of the Desert Hearts movement, began feeling drawn into their process and inspired to work with them.

Once the three of them came together, they all knew something special was coming. A domino effect ensued that didn’t just lead to three incredible tracks—which comprise the Torus EP—it led to the founding of Desert Hearts Black (DHB), the new techno-driven sublabel of Desert Hearts Records.

While DHB is technically under the leadership of Marbs and Casey, Rinzen was there from the start and is an integral part of the musical equation that spawned the label. Not only did he assist in producing DHB’s first release, but he also played the imprint’s launch party.

He helped introduce Desert Hearts Black to the world in both form and function, and as such, is a perfect person with whom to discuss the label’s conception, goals, and values.

How would you describe Desert Hearts Black in your own words, and how would you compare ...