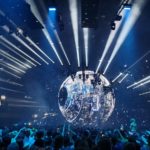 Although it only saw one performance at the first weekend of Tomorrowland, Eric Prydz‘s EPIC 6.0 holosphere was simply unreal. EPIC stands for “Eric Prydz In Concert,” and that’s exactly what that performance was: a concert.

A club night is not a concert. A DJ set on a giant stage is not a concert. A concert is equally visual and aural in that the audience’s eyes and ears should remain fixed on the stage out of a resolute and irrational fear of missing but a moment. With Prydz and his DJ equipment inside the sphere, almost completely out of sight, fans who were lucky enough to be in that one crowd received a performance that was purely audio-visual.

Unfortunately, part of the Freedom stage, which housed the sphere at Tomorrowland, sank after the first weekend, and the organizers were unable to reconstruct the stage in time for the following weekend. As such, the second holosphere run was cancelled.

Luckily for the rest of Prydz’ global fanbase, The Verge was able to take a behind-the-scenes look into the holosphere from conception to production. In the video below that is just shy of eight minutes, The Verge interviews the visual designers, the architects, the technicians, and of course, Prydz himself.