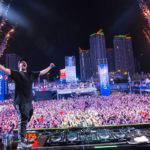 Those who have been following Mad Decent‘s movements lately will know the label’s been on a huge house tip this year, coming to a crest with Diplo’s house music-heavy set at Coachella this past April. The Mad Decent boss as well as his frequent label cohorts like Anna Lunoe (exemplified in her most recent EP release) and Valentino Kahn are diving headfirst into four-on-the-floor with well-timed ferocity.

Continuing this trend in fine style, Kahn has seen fit to jam-pack six of his hottest house releases into one convenient package: an EP, aptly titled House Party.

This EP (Kahn’s second EP ever) contains three huge solo cuts including the off-the-wall dancefloor weapon, “Pony,” in addition to three equally destructive collaborations like “JustYourSoul” with Diplo himself, and “Flip The Switch” with Chris Lorenzo. Stream the full EP below.

Anti Up raise the stakes with another dance floor dominator, ‘Right Now’
Nick Cave Reveals That He Once Made a Song With Flatbush Zombies