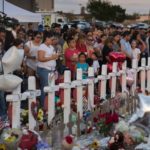 The first weekend of August, two mass shootings in Texas and Ohio left more than 31 people dead in the span of 14 hours.

The first shooting in El Paso, Texas on Saturday, Aug. 3 took 22 lives. Another nine people were killed in Dayton, Ohio. The two shootings are the latest in a dangerously common trend that have led to a toll of 255 U.S. mass shootings in 2019 as of today. The number of mass shootings has outpaced the number of days in the year.

In wake of the recent tragedies, the world has shown an outpouring of support and condolences for the communities affected. Artists and music industry figures, from Mija to Khalid to Lana Del Rey, and Bebe Rexha used their platforms to express their grief and provide comfort for those affected.

Mija, Khalid, and Riot Ten took to social media to announce their respective benefit concerts while Lana Del Rey wrote a song, “Looking for America” with Jack Antonoff in light of events. Meanwhile, Bebe Rexha urged her followers to talk to their senators to make changes against gun violence.

J.I.D. and Kacey Musgraves used their Lollapolooza slots to address audiences. The rapper dedicated a moment of silence to victims before his set, while the country singer addressed issues during a performance of a song “Rainbow.”

“I can’t even believe that we’re having to process the s–t that’s happening in the last twenty-four hours, much less everything that’s happened in the last two-hundred and f–king fifteen days in America. I don’t know what the answer is but obviously something has to be f–king done,” Musgraves stated. “Maybe somebody will hear us if we all yell together to say, ‘Somebody f–king do something.”