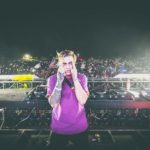 Goldrush Music Festival its preparing for it’s third edition, bringing a little extra heat to the tail end of Arizona’s summer swelter. The festival announced the first phase of 2019’s lineup in June with electronic power players like ZHU, Alison Wonderland, and Destructo topping the initial wave of talent for this year’s iteration. Now, Goldrush is following up with an equally stacked second phase billing that includes Getter, Adventure Club, Green Velvet, Troyboi and more.

The two-day event, running September 27 – 28 features a diverse array of electronic and hip-hop acts, from Zomboy to Sheck Wes, Hermitude to Lil Texas, with tons in between. Tickets to Goldrush are on sale now, don’t sleep. See the full festival lineup below.