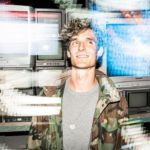 It’s been nearly three months since GRiZ released his sixth studio album, Ride Waves, which saw the producer branch out into new creative territory. The 14-track compilation featured collaborators such as Wiz Khalifa and Snoop Dogg, blending GRiZ’s distinctive funk and bass style with high-profile artists. Now, just a few months after the full Ride Waves album release, the producer is back with a brand new EP.

The three-track EP is titled Bangers[1].Zip and showcases GRiZ’s sonic diversity at its finest. The compilation begins with “Voodoo,” which blends heavy dubstep drops with light reggae melodies. Fans may also recognize “Ice Cream,” a track from the EP he’s been previewing on season one of his tour.