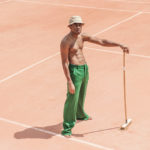 Set for release May 17, IGOR will follow his critically acclaimed album, Flower Boy, as the first full-length project to arrive on Tyler’s behalf after the latter album’s 2017 release. While the Camp Flow Gnaw founder previously made no hints at an upcoming album, a Sony financial report that detailed new projects from the artist alongside two new clips caused fans to speculate fervently that Tyler has been sitting on new music.

Titled “IGOR’S THEME” and “WHATSGOOD” (posted May 1 and May 3 respectively), the snippets preview what’s to come via IGOR. The content embodies Tyler’s signature style —strange, very much outlandish, and provoking in one genius package. Lewis Rossignol created the visual art for the release.

Recently, Tyler put out an EP inspired by animated remake of The Grinch as well as singles here and there, including “Potato Salad” with A$AP Rocky. He has continued working on his fashion brand Golf Wang since its inception in 2011.