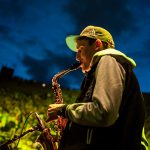 Grant Kwiecinski, better known as Detroit-based DJ and producer GRiZ, has spent the last few years modestly making major career moves. Aside from his penchant for touring and festival performances, he released the second edition of his Chasing the Golden Hour mixtape series in 2017, and started quietly releasing singles towards the end of 2018. Now back in full force, GRiZ has released his sixth studio album, Ride Waves.

An album full of features, GRiZ maneuvers previously uncharted territories with high profile talent like Snoop Dogg, Bootsy Collins, and Wiz Khalifa, while bringing on some long-time favorites like Muzzy Bearr, Yoshi Flower (formerly of Gosh Pith), and Leo Napier. With funk and bass taking a front seat as always, Ride Waves expands on GRiZ’s classic sound over 14 tracks, which can all be streamed below.