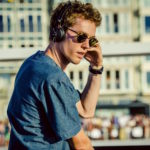 “American Boy” caught on like wildfire upon its 2011 release, putting Estelle on the map as a prime new talent to follow with a Kanye West co-sign. The single has since become a bonafide pop classic, and now Lost Frequencies has arrived to add a dance music twist. Per his usual M.O., the producer has twisted the original into an equally euphoric, chilled-out house tune with minimal layering. Estelle and Kanye’s vocals continue to take center stage, while Lost Frequencies builds around them with warm, analog synth melodies and a simple underlying chord progression that keeps the track bouncing along at an even pace. Taking on a megahit is always an intimidating task, but Lost Frequencies has proven he’s par for the task in this new remix.

Lost Frequencies was recently hosted on our Axis mix series. Give his mix here a spin after enjoying his “American Boy” re-do.