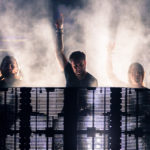 The painstakingly slow pace with which Swedish House Mafia individually announced each of their upcoming 2019 performances contrasts with the unanticipated rapidity of the supergroup’s cancellation of all upcoming shows—effective immediately. Swedish House Mafia have been a highly sought lineup inclusion since their landmark reunion at Ultra Music Festival in 2018. The “Greyhound” producers recently topped Ultra Europe‘s 2019 lineup, as well as Ultra Korea, Lollapalooza Berlin, and Creamfields’. Now, instead of “Save The World” at festivals across the globe, Swedish House’s unexpected and incredibly swift cancellations presents these festival organizers with a new challenge: “Save The Lineup.”

Swedish House Mafia have also backed out of their singular headlining shows. Axwell, Ingrosso, and Angello were slated to take the decks in a number of cites worldwide, ranging from Mexico City to Stockholm. Swedish House Mafia jointly broke the news of the cancellations during an interview on BBC Radio 1.

“You know what they say, three’s a crowd. We found that to be true as we plotted our comeback tour,”

Steve Angello said. The Size Records figurehead confirmed that he will continue to solo produce and release music.

While each member of the Mafia stated his regret that the reunion effort will not in fact come to fruition during the interview, Axwell and Ingrosso also expressed their optimism for the future. The pair previously shared their plan to press pause on their Axwell ^ Ingrosso project, in order to devote the full scope of their focus to the revival of Swedish House Mafia. “We will now, in fact, be taking our old project off the shelf. We thought about doing a countdown to a bunch of new dates for Ax and I, but we thought ...